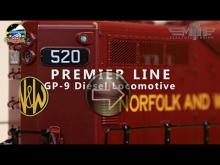 May 4, 2021 - M.T.H. Electric Trains will be releasing several limited-edition releases of the Premier Line O Scale GP-9 diesel locomotive in four different liveries later this Fall. Each of these offerings are available in two cab numbers are expected to arrive on M.T.H. Authorized Retailer shelves in October 2021.

Electro-Motive Division's GP (for "General Purpose") engines were the brainchild of project engineer Dick Dilworth. In the late 1940s, Dilworth saw that America's 30,000 miles of main line rail had been virtually dieselized, but the 130,000 miles of secondary lines that carried half of the nation's freight traffic were still largely steam powered. He viewed that as a huge marketing opportunity.

In The Dilworth Story, a book published by Electro-Motive Division in 1954, Dilworth explained how he tried to meet that opportunity: "In planning the GP, I had two dreams. The first was to make a locomotive so ugly in appearance that no railroad would want it on the main line or anywhere near headquarters, but would keep it out as far as possible in the back country, where it could do really useful work. My second dream was to make it so simple in construction and so devoid of Christmas-tree ornaments and other whimsy that the price would be materially below our standard main-line freight locomotives."

Of course, Dilworth's explanation conveniently ignored the fact that Alco's arguably uglier RS-1 had introduced the road switcher concept eight years before EMD. And in one sense, Dilworth's project was a failure. Railroads bought Geeps for mainline service and relegated older power to secondary lines as they had always done. But his brainchild became the runaway best-seller among first-generation diesel power. U.S. and Canadian railroads bought nearly 7,000 copies of the 1500 horsepower GP7, introduced in 1949, and the 1750 horsepower GP9, produced from 1954 through 1963.

Check out each of the schemes in the list on the left.