February 16, 2021 - M.T.H. Electric Trains will be releasing several limited-edition RailKing O Gauge items featuring political themes inspired by M.T.H. President Mike Wolf. Each of these items represents the last of items featuring political interests of Wolf as he prepares to retire later this year and close his company after 41 years. Each of these offerings is expected to arrive in late Spring/early Summer 2021.

The first release in the series is a RailKing SD70ACe Diesel/Caboose set from the RailKing Imperial product line and features Mike's 2024 Trump fantasy scheme should the former president run again. Under the hood you'll find a Proto-Sound 3.0 sound set featuring Trump sound bites along with sounds recorded from an actual SD70ACe. Additional features include operating diesel exhaust smoke and LED lighting. If you're looking for realism and a lot of fun at a RailKing price, it doesn't get any better than this! 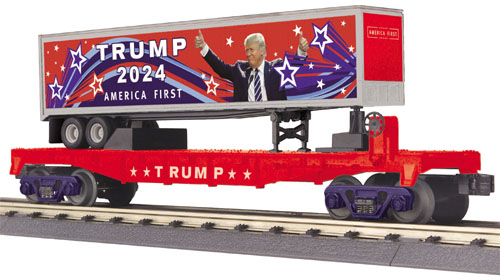 A 4-Car Window "Ballot" Box Car collection is also available featuring graphics that echo one of the major stories of the contested 2020 election. Each of these cars is sold separately and contains the name of the city that tipped the election in favor of the victors. The sides of the cars open up to reveal the contested ballot boxes.

Check out all the releases in the list on the left.