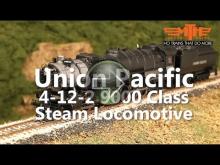 Known as a “Union Pacific” type for their wheel arrangement unique to the U.P., the 9000s were also the most successful three-cylinder rod locomotives ever built in the United States. The third cylinder was placed between the two outside cylinders and drove a rod connected to the second axle, which was shaped like a crankshaft rather than a straight axle. A pair of hinged rods driven off the outer cylinders, and clearly visible on the pilot deck in front of the cylinders, operated the third cylinder’s valve gear — a design borrowed from English locomotives like the Flying Scotsman, and known as Gresley valve gear.

The rest of the middle cylinder’s machinery, however, was not so visible or accessible, and tended to receive less than the optimal amount of attention from shop crews. Despite the maintenance headaches of the third cylinder, however, the 4-12-2s proved versatile and dependable. When faster and more powerful Challengers and Big Boys replaced them as the UP’s premier freight engine, the 9000s became the principal freight power on the Nebraska division, where they served until early 1956. Engine No. 9000 was saved from the scrapper and resides today at the Los Angeles County Fairplex in Pomona, CA.