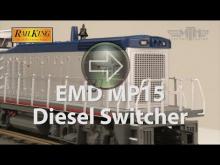 To create a more versatile switcher, EMD gave the MP15 a longer frame than its predecessor, the SW1500, in order to fit it with the same Blomberg trucks as a road engine. Those better-riding trucks, along with more weight, a larger fuel capacity, and bigger sandboxes, made the MP15 suitable for road duty as well as switching, and allowed EMD to sell more than 500 units before the last MP15 was delivered in 1987.

The MP15 came in two flavors, traditional and modern. The MP15DC used traditional electrical gear and shared the front-mounted radiator and air intakes that had characterized all previous EMD end-cab switchers. It was basically a beefed-up SW1500. The MP15AC, however, incorporated EMD's Dash 2 technology, with solid-state transistors and circuit boards replacing the wiring, switches, and relays found in earlier diesels. Its cooling system was borrowed from the "Tunnel Motors" EMD had created for the Southern Pacific.

The front of the hood was plain, like the rear of a Tunnel Motor, and the radiator air intakes were moved to the sides of the hood, low and at the front of the engine. Not surprisingly, the Southern Pacific was the first customer to order an MP15AC. Because the Dash 2 technology was relatively new and some railroads found it unnecessarily expensive for a lowly switcher, EMD continued to make both the DC and AC versions of the MP15 for most of its production run, and sales for the two models were about equal.