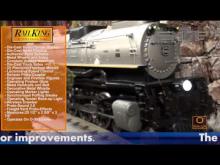 August 28, 2014 - M.T.H.'s RailKing Imperial Series O Gauge Union Pacific Challenger steam locomotive is now available at your local M.T.H. Authorized Retailer. Check out the locomotive's details by clicking the video icon to the left or below to see it in action.

The first Challengers were conceived in 1936 as fast freight engines to replace the Union Pacific’s fleet of three-cylinder 4-12-2 locomotives. With an extra center cylinder for added power and a top speed of 45 mph, the 4-12-2s had been successful freight engines when built in 1926. But a decade later they were considered slow and difficult to maintain. So American Locomotive Works (Alco) was commissioned to build what became one of the most successful fleets of articulated engines on any railroad. Forty Challengers were built in the 1930s. The pressure of wartime traffic brought an order for 65 more with bigger tenders and many minor improvements.

The Challengers were steam power at its zenith. They incorporated all the technology that represented super-power steam, including roller bearings on all axles and drive rods — but none of the foolishness that characterized some of the desperate efforts to save steam in the post-war years. Most Challengers were assigned to freight duty, but a number were designated for passenger service, hustling 20-car trains across mountains and deserts to California and Oregon at speeds up to 70mph.

It was in a roundabout way that six Challengers ordered by the UP ended up hauling coal through the Appalachians for the Clinchfield Railroad. In the midst of World War II, the War Production Board refused the Rio Grande’s request to order new articulateds of its own design from Baldwin Locomotive Works. Instead, the Board diverted the last six Challengers in UP’s order to the Rio Grande — which turned up its nose at the locos and decided to lease them for the duration rather than buying them. After war’s end, the Rio Grande returned the unwanted engines to the government. In 1947, the War Assets Administration sold the orphan locos to the Atlantic Coast Line and Louisville & Nashville Railroads, which put the Challengers to work on their jointly-owned subsidiary, the Clinchfield, Carolina & Ohio. Thus a group of engines intended to speed over western deserts and mountains ended up thundering through Appalachia.

M.T.H. is proud to return the Challenger to the RailKing line-up with the awesome sound and performance of Proto-Sound 3.0. These smooth-running 4-6-6-4s are equipped with RailKing Imperial features that include marker light housings with individual LED illumination; authentic, legible builder’s plates; additional grab irons; operating firebox glow; cab interior lighting; painted backhead gauges; and safety chains for the tender trucks. Appearing for the first time in the RailKing Imperial Series with Proto-Sound 3.0, this artful recreation is packed full of features not found from any other manufacturer at this price level. With its synchronized puffing smoke, full digital sound and wireless drawbar, these DCC/DCS Proto-Sound 3.0 equipped locomotives are certain to make a realistic addition to any O gauge model railroad.