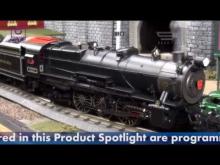 May 29, 2013 - The M.T.H. Premier Line K4s 4-6-2 steam locomotives are now on M.T.H. Authorized Retailers shelves. Check out the locomotive's details and see it in action by clicking on the video link to the left or the Youtube link below. On perhaps the greatest railroad ever, no steam locomotive was more revered than the legendary Pennsylvania K-4s Pacific. Evolving from a program begun in 1914 to develop heavy freight and passenger classes utilizing common boiler designs, the K-4s was an instant success. From 1917 to 1928, a total of 425 units were built at the Juanita and Baldwin Shops. The 4-6-2 K-4s became the Pennsylvania's principal passenger hauler, possessing a consummate blend of speed and power. Often double headed on east coast limiteds in front of a Pullman consist, the K-4s was a common and beautiful sight on the Pennsylvania's rails, and became synonymous with that railroad's steam power. Later, after World War II concluded, the Pennsy's needs changed and the K-4's appearance underwent a series of changes to better serve those needs. The most apparent changes showed up on the 1947 Postwar or Modern version of the K-4 and included a solid drop-coupler pilot, repositioned boiler front headlight and the addition of a steam generator below the headlight. M.T.H. Electric Trains is proud to return the Prewar 1928 version and 1947 Postwar rendition of this magnificent steam locomotive to life in all die-cast construction. Featuring all of the craftsmanship and detail that make an M.T.H. steam locomotive the industry's best value, your K-4s will quickly find a home on your layout or in your collection for years to come. Constructed with numerous added-on detail parts, the K4s offers you this combination of prototype realism and all the operating features you’d want in a steam locomotive: smooth, steady operation down to 3 scale miles per hour; remote Proto-Couplers; chuffing sounds and puffing smoke synchronized with the drivers at a correct four chuffs per revolution; adjustable smoke intensity; great pulling power; directional lighting; and authentic sounds.