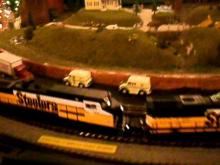 The Pittsburgh Independent Hi-Railers are masters of showmanship. Their layouts recreate the old-time pleasure of watching a massive train go by a crossing and counting the cars until the number seems too high to believe. Visitors are frequently handed a controller and given the thrill of running a 10–80 car train. Kids (and adults) can also push buttons to activate trackside accessories.

With only 8 members, the Hi-Railers assemble 10 to 85 modules at about a dozen public shows per year. Until recently, their biggest event was an annual Christmas show at a local mall that draws about 6,000 visitors per year. The 2008 display is featured on this YouTube video.

This past holiday season — in addition to the mall show — they were invited to display at the first annual Holiday Lights festival at Kennywood Amusement Park, a Pittsburgh-area treasure and one of only two amusement parks on the National Register of Historic Places. The festival drew about 40,000 visitors over three 3-day weekends — including one who posted this YouTube video that features double-headed steamers and triple-headed diesels.

Not surprisingly, the club has been asked to participate again in 2012. A thread on the O Gauge Forum also featured some good photos and commentary on the Kennywood display.

Back to Blue Comet Award Winners