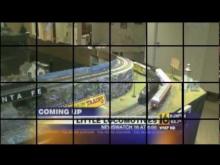 Not very far away, the club was into its second year of running a year-round display featuring 10 layouts in multiple scales in a once-vacant storefront in the Columbia Mall. That layout prompted a December 5 story on WNEP-TV and a newspaper story later in the month headlined “Two model train sets to be given away today.” The article noted that “The gigantic Loose Ties display, running more than 60 trains and 300 boxcars, tank cars and gondolas, has become a premier attraction, drawing more than 1,300 visitors every weekend it’s open at the mall.”

Loose Ties’ Blue Comet Award application notes that “Our train room at the Columbia Mall is open the second weekend of every month. The Mall helps us promote our weekends because of all the visitors that we bring to the Mall. We give out between 3,000 and 5,000 raffle tickets each year for our three train displays. Our club motto is ‘Christmas, Kids and Trains, They Go Together.’”

The club’s third display last holiday season was in Lewisburg, PA, at the Susquehanna River Valley Visitors Bureau, where adults were invited to “bring a train that they may have had as a child, and the Loose Ties Model Railroad Club will run them on the layout.”

Back to Blue Comet Award Winners