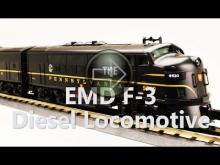 When the prototype railroads began to dieselize in the 1940s, model train manufacturers soon followed, recognizing that boys wanted models of the newest trains they were seeing on real railroads. One of the initial toy train forays into dieseldom was a Lionel replica of the best-selling diesel of the day, the F3 "covered wagon" made by the Electro-Motive Division of General Motors.

Recognizing that EMD and the railroads were anxious to publicize their modern motive power, General Motors, the Santa Fe Railroad, and the New York Central Railroad helped share the cost of dies for the original models in exchange for having their names on engines that appeared on virtually every boy's holiday wish list for years. In the end, it seems the Santa Fe got the best deal, as its red, yellow, and silver "warbonnet" F3s remained a popular fixture on model railroad locomotives longer than any other railroad livery.

To this day, the F3 diesels of the late 1940s and early 1950s are recognized as some of the best toys ever produced. Virtually full O gauge scale models, they were tremendously dependable, highly detailed for their time, and terrific pullers.

Postwar and RailKing Scale fans will no doubt want to order this stellar M.T.H. replica of model railroading's most famous diesel. The look and feel of the classic original is faithfully reproduced, right down to the diecast metal chassis. Under the hood, however, lies the power and performance of ProtoSound 3.0, twin flywheel-equipped motors, and Proto-Smoke, offering today's model railroaders an operating experience that boys of the 1950s could only dream about.