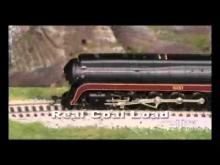 February 11, 2009 - New for 2009, our HO N&W J will be more fun to operate than any previous version of this magnificent locomotive, with its N&W whistle, passenger station announcements, synchronized chuff and puffing smoke, and speed control so smooth you wonﾒt spill the water in the diner. For more information on our superbly detailed model and its prototype, including surviving J No. 611. You can see the locomotives operating on 18" radius curves in Taylor's latest Product Update VIDEO.
Norfolk & Western J-Class Northern

A visit to the Norfolk & Western in the early 1950s was like a scene from Jurassic Park: prehistoric beasts romping in their natural mountain habitat. At a time when other roads were letting their remaining steam engines rot away and giving them minimal service in dirty, dingy, soon-to-close facilities, the N&W was still running a first-class steam operation and even building new power. With its main line through some of the nationﾒs richest coalfields, it was still betting on the future of steam; as late as 1955, the N&W didnﾒt roster a single diesel. The majority of traffic was handled by what N&W fans call the ﾓholy trinity of steamﾔ: the massive Y6 2-8-8-2; the articulated greyhound Class A; and the N&Wﾒs glamour girl, the streamlined Class J.

The Class J 4-8-4 was an engine of quiet superlatives. Handsome, powerful (5100 hp), and, as a test on the Pennsylvania Railroad proved, capable of hauling 15 cars at 110 mph, it was designed and styled not by one of the big three builders (ALCo, Baldwin, and Lima) or a famous designer like Raymond Loewy or Henry Dreyfuss, but by the N&Wﾒs home-grown team of designers and craftsmen at the roadﾒs Roanoke, Virginia shops. For power and quick acceleration through mountainous territory, and to make room for the largest possible boiler, they equipped the streamlined J with 70ﾔ drivers ﾗ unusually small for a 4-8-4 and fully 10ﾔ smaller than the Southern Pacificﾒs Daylight GS-4 of the same wheel arrangement.

Built in several groups between 1941 and 1950, a mere fourteen Jﾒs were able to handle 80% of the N&Wﾒs passenger traffic, because their designers addressed one of steam powerﾒs key weaknesses: down time for maintenance and repairs. Equipped with Timken roller bearings on all axles and rods, Timken-designed lightweight pistons and rods, and an automatic lubrication system that reached more than 200 points including the bell bearings, the Js were designed to go a quarter-million miles between scheduled shop visits. Like a race car, they were engineered for quick pit stops: in less than an hour, a J could be fully serviced, lubricated, filled with coal and water and ready for its next dash over the roadﾒs 676-mile main line between Norfolk and Cincinnati, hauling the deluxe daylight Powhatan Arrow or the overnight Pocahontas.

More information on the steam engine models can be found by visiting our MODELS Page.

Both locomotives can be ordered through any M.T.H. Authorized Retailer.