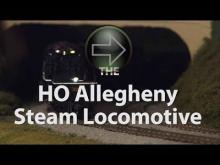 The biggest engines east of the Mississippi were not rostered by the biggest railroads. There were no legendary articulateds racing along the NYC’s Water Level Route or charging over the Pennsy’s Horseshoe Curve. It was the smaller, scrappier eastern roads dedicated to wrestling coal out of Appalachia — the C&O, N&W, Virginian, Clinchfield, Western Maryland — that owned articulateds rivaling anything in the West. And the king of them all was the Chesapeake & Ohio’s Class H-8 Allegheny.

With four fewer drivers than a Union Pacific Big Boy, an Allegheny could deliver nearly a thousand more horsepower to the rails. Its massive firebox was big enough to host a board meeting — so big it required a unique 6-wheel trailing truck to support it. Its drivers carried the highest axle load of any steam engine, ever. To make the Allegheny fit the C&O’s existing 115-foot turntables, its tender was made taller at the rear, to accommodate 25 tons of coal and 25,000 gallons of water. This required a unique 4-wheel rear truck on the tender.

The Allegheny was the brainchild of Lima Locomotive Works, where the superpower steam concept had been invented in the 1920s. Like the Big Boy, it was designed to lift monstrous loads over one specific piece of railroad: the 80 miles between Hinton, West Virginia and Clifton Forge, Virginia, a coal route from the mines over the summit of the Allegheny Mountains toward tidewater ports. The engine took its name from the mountain range it traversed. Delivery of the iniital order of 10 locomotives began just days after Pearl Harbor and a few months after the first Big Boy; the C&O was so pleased with the giant engines that it ordered 50 more over the next seven years. Fellow coal hauler Virginian took delivery of eight copies in early 1945, naming them Class AG Blue Ridge types.

Typical service on the C&O was lifting 140 loaded hoppers out of Hinton with one H-8 on the point, and another pushing at the rear and cutting off after the mountain summit was reached. About a third of the engines were equipped with steam heat and signal lines for wartime passenger and mail service, where they could reach their maximum speed of 60 mph. Later in their careers, some H-8s were assigned to flatter territory in Ohio and Kentucky, where a single Allegheny could walk away with a 160-car freight. When the final H-8s were retired in 1956, No. 1601 steamed under its own power to Dearborn, Michigan, to become a permanent exhibit in the Henry Ford Museum. The one other surviving Allegheny, No. 1604, resides today in the B&O Railroad Museum in Baltimore, Maryland.

New for 2014, our die-cast model replicates all the features that made the prototype Allegheny as powerful visually as it was physically: high pilot deck for access to its smokeboxmounted air pumps; huge twin sandboxes located fore and aft of the steam dome; massive steam delivery pipes for both front and rear engines; torpedo-like air tanks ahead of the cab; and more. Like all M.T.H. articulateds, our Allegheny features puffing smoke and authentic articulated chuff sounds, with the front and rear engines going in and out of sync. It senses what type of power is on the rails and automatically adjusts to operate on analog DC, DCC command control, our own DCS digital command system, or (in the 3E+ version), Märklin command control. And when operating with DCS, just a few keystrokes will setup two H-8s to operate together as a lashup, with one at the head of your train and one at the rear, just like the prototype heading east over the Alleghenies.